Bauhaus wanted to significantly improve their delivery service by offering their customers next day deliveries for online orders to secure their continued growth.

DF’s relationship began with Bauhaus when new logistic manager Winnie Kruse joined the corporation. DF began their partnership with Bauhaus back in 2015, providing next day deliveries for the Bauhaus webshop in Denmark.

An agreement between DF and Bauhaus was reached and the process to move their existing Danish webshop to DF began. Bauhaus also planned to move their central warehouse, if DF could significantly improve the current delivery service.

It took 6 days and 65 trucks for DF to move all the stock from current 3PL provider (7,500 separate article nos. in total). The first challenge was that DF had not physically seen the stock; they therefore did not realise the vast variation in each article type, which made it difficult for DF to provide an optimal solution from the beginning. DF worked 2 shifts from 06.00-22:00 to ensure the transfer was completed as quickly as possible.

However, as the webshop had remained fully operational during the entire transition, a backlog of orders had generated which DF had to address before they were able to fully meet these commitments.

After a period of negotiations this was expanded to also include Bauhaus’s central warehouses which currently feeds 18 stores throughout Denmark, Norway and Iceland.

DF invited Constructor to a brainstorming meeting, where it was concluded that DF needed a solution with pallet racking for odd shaped and volume goods combined with a machine for efficient picking of smaller items. The first proposal did not work due to fire regulations, so the solution was revised, and shelving was introduced to the lower levels, as DF needed to be able to store all the article no.s  to enable quick picking. With pickers now operating inductive picking trucks and using hand held scanners, this made it quicker for the pickers to maneuver throughout the 2000sqm. warehouse. 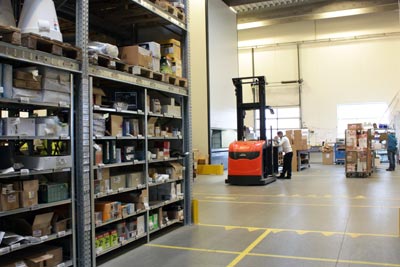 With Constructor’s wealth of expertise within the Ecommerce industry and DF’s ability to embrace new storage solutions, it was agreed that they needed a different approach to handling the webshop, due to the large number of article nos offered, especially as this webshop carried an impressive 11,000 separate article nos. Appreciating the situation, Constructor recommended installing the Tornado storage machine. 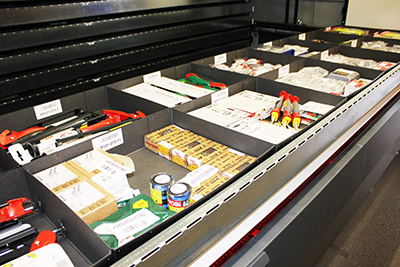 Now that the inductive picking trucks and the Tornado were installed – DF significantly increased the pick rate, taking it from an average of 1.2 item lines per order to 3.5 item lines per order, which came in useful when DF received over 1,100 orders on Black Friday alone.

DF is primarily a transport and logistic company, specialising in transporting goods b-t-b. However, by servicing the logistical needs of Bauhaus, means that DF can now comfortably handle approx. 3-400 b-t-c deliveries a day. This has only been achieved by ensuring the correct solution was initially installed. The picking trucks and the Tornado storage machine meant that DF’s expectations were met for today and into the future. The Tornado machine is the first one to be commissioned in a DF warehouse, its little wonder why colleagues from far and wide are coming to view its magnificent capabilities within this demanding environment.

Calle Nicolaisen Project Manager from DF said: “We chose the racking and the Tornado storage machine from Constructor because their products are high quality. Constructor are not the cheapest on the market, but they are definitely the best. Constructor always joins our projects with an open mind. They are innovative in their way of thinking, and they accept that a project may lead to nothing. To us they are more like a partner than a supplier”.