The HI280 shelving system from Dexion has conclusively passed the DNV GL conductivity tests, which confirms that it has metallic continuity, and therefore has a very low resistance to ground when grounded. 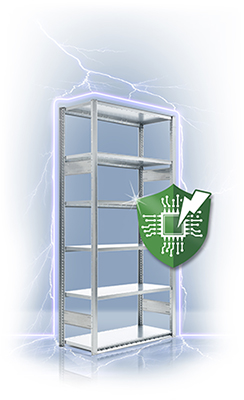 As a result of the continuity, static charges cannot accumulate on the rack when it is grounded, and statically charged objects placed on the racking will rapidly discharge. The bay can therefore be used to store Electrical Sensitive Devices (ESD) if placed in appropriate anti-static packaging.

The DNV GL testing was requested by Dexion Storage Solutions SRL, so that conductivity performance could be evaluated. These tests are important, as the readings determine if the shelving has a low resistance at any point on the shelf surface towards the ground connection. A low resistance to the ground guarantees that no static charge can accumulate on the bay, and that any statically charged object placed on it will rapidly discharge to the ground.

A four point measurement method was used to determine the electrical resistance of the shelving bay. The shelving bay was assembled and grounded correctly in accordance with instructions supplied by Dexion.

Measurement points where taken between the ground connection point on one leg and the top shelf of the bay, so that the current had the longest path to travel. This provided a conclusive measurement which was applied to the entire shelving bay.

The resistance between the grounding point and the top of the shelving bay was measured at a value of 3,1 mΩ.

DNV GL is one of the world’s leading certification bodies, which enables organisations to advance their safety and sustainability within their business. DNV provides classification and technical assurance along with software and independent expert advisory services to the maritime, oil and gas, and energy industries as well as providing certification services to customers across a wide range of industries.

Operating in more than 100 countries, DNV’s 16,000 professionals are dedicated to helping its customers make the world safer, smarter and greener.